We are setting out to conquer the world.” 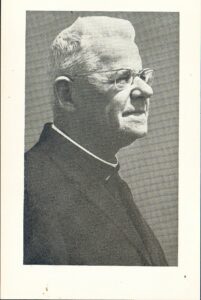 One night in a small town in Halle, Belgium a small boy called Joseph crept downstairs to where his mother and father were discussing his future and hesitantly announced to them that he wanted to continue his studies and become a priest. In later years he never forgot their generous response and the sacrifice it meant for them as  working people to support his calling. On his father’s death in 1903 Joseph Cardijn, now in the major seminary, pledged to give himself entirely to the service of working class people. This appreciation of his parents’ faith and generosity was combined with the pain he experienced at seeing the effect of working life on his friends who went straight into the factories from school and with his sensitivity to the deplorable conditions of working life suffered by young workers in his first parish in Laeken near Brussels in 1912.

Fr Cardijn was a lively and energetic man of action. He did not wait for the young people to come to him and because of his attentiveness to the realities of working and family life neither did he sit in the presbytery lamenting the absence of young people from the church on Sunday. He mingled with the homeward bound workers in the streets and learned more and more about their situations. He was then able to set up small ‘study circles’ in which, initially, young women could share their experiences and seek solutions together for the challenges they faced at work, at home, among their friends and in their neighbourhood. Soon the boys also sought to benefit from this experience and formed their own groups. Those years were a period of ceaseless activity and experiment.  Father Cardijn was no mere theorist. He was also ready to try new methods over and over again until they achieved real formative results.

The First World War did not interrupt his efforts even though on two occasions he was imprisoned for patriotic activities. During the several months he spent in the prison‑cells he was able to meditate upon his experiences and to outline practical methods of  apostolic formation for young working people. Eventually in 1924 together with three of the early leaders from Laeken, Ferdinand Tonnet, Paul Garcet and Jacques Meert, Fr Joseph Cardijn created an organisation which would specifically address the needs of young working  people, the Young Christian Worker Movement.

The Second World War did hamper the progress of the YCW which had spread throughout Belgium and many other countries in Europe. Fr Cardijn was again imprisoned for his opposition to Nazi philosophy and two of the early leaders died in concentration camps. When peace finally came to Europe the development of the Movement resumed and in the 1950s spread all over the world. In 1957 the first international team was formed in the context of an International gathering in Rome. Ten years later the founder of the YCW, now Cardinal Joseph Cardijn, died at the age of 84, having visited the Movement in every continent.

In 1975 a new Declaration of Principles was drawn up during the International Council of the IYCW (International YCW) in Linz which provoked protest and division among the member Movements. After ten years of internal unresolved debate a new International Coordination was formed (ICYCW) in 1986 in order to re-establish the original principles and method of the Movement. This was subsequently recognised by the Church as promoting the authentic form of the YCW in line with the original vision of its founder, Joseph Cardijn.

When Fr Cardijn started his first small group of young working men over 80 years ago, he said to them: “We are setting out to conquer the world.”  We hope this manual, translated and spread around the world, will help to continue that conquest in the spirit of overcoming all obstacles that prevent young people living the fullness of life which God intended for them.

“Give me leaders and I will raise the world”
Joseph Cardijn

“Three fundamental truths dominate and illumine the problem of the working youth of the world.  They inspire, explain, and direct us towards the solution that the Y.C.W. has to give:

The Truth of Faith

At the origin and heart of the YCW is a wonderful truth clearly and frequently proclaimed by its founder. It is the truth of faith:  that young workers are created in the image of God and have a God-given dignity and an eternal destiny.”  (ICYCW Declaration of Principles)

“Young workers are not machines, or animals or slaves.  They are the sons, the daughters, the collaborators, the heirs of God.  ‘He gave them power to become the sons of God… partakers of the Divine Nature.’  That is their sole true destiny, the reason of their existence, their life, and their work, the source of all their rights and all their duties.” (Joseph Cardijn)”

This truth is founded in the story of creation where God creates man and woman in his own image. Within each young person, therefore, there is woven something of God: the capacity to love, to be creative, to take responsibility for creation.

From this truth flows the dignity and worth of each young person which is not dependent on the amount of money they have, their physical attractiveness, the clothes they wear, the district they live in, the work they do. It is part of their very being and cannot be taken away.

The dignity of the young worker specifically is further upheld by the awesome yet barely noticeable event of God coming among us first as a child and then as a young carpenter living 30 years in a working family in Nazareth before he ever preached a word or healed a sick person. The very silence of these years proclaims the sacred worth of everyday working life and the precious dignity of family life. Each young person can come to know Him as a friend and brother who shares their joys and sorrows, hopes and struggles.

This Carpenter-God of working life comes so that we may have life and have it to the full. This is not just a promise of a better life after death. It means that God wants to transform our life now into something fullfilling, abundant and glorious. In the death and resurrection of Jesus Christ there is power to raise young people up to a new quality of life. He is the shepherd who lays down His life for the sheep.

They in turn can take up their life and, in His grace, transform each ordinary detail into a moment of saving love for themselves and those around them.

“The life, the actual conditions of existence of the mass of young workers is in terrible contradiction with their eternal and temporal destiny.  We must have the courage to face this reality, just as we must always face the reality of their eternal and temporal destiny.  We must remain with our eyes fixed to heaven and our feet on earth, as inexorable for the brutality of the conditions of earthly life as we are inexorable for the demands of eternal destiny.  We must realise the age, the conditions of work, the influence of environment, the problems to be solved in isolation, in loneliness, in experience.  Present conditions increase the tragic aspect of the opposition between the two realities; unemployment, crisis, impossibility of founding a home, of bringing up children. And all this in a wave of neo-paganism without precedent in history.” (Joseph Cardijn)

The actual experience of young people leaving full-time formal education and entering the world of work stands in stark contrast to the beautiful faith vision of the God-given dignity and worth of young people. This is still a terrible contradiction. The reality is more nuanced than in Cardijn’s day. Young people in economically advantaged situations experience the pressures of a consumer society and the influences of secular materialism, while young people in areas of economic deprivation face lack of work, little chance of building a family future, bad living conditions and the constant danger of being drawn into prostitution, drug abuse and violent crime.

The Truth of Method/Pastoral Response

The YCW is an organised Movement because what it tries to achieve cannot be left to chance. The apostolic formation of young people does not suddenly happen of its own accord. Moreover, the influences behind the reality that young people suffer are well-organised.

The extraordinary insight and belief of Cardijn was that this organisation had to be in the hands of the young people themselves, by them, for them, among them.

The purpose of the YCW is to serve, educate and represent young working-class people.

The means to this end which the YCW proposes is to call, form and sustain young leaders in life who, by their life and example, will bring the whole of the truth of faith into the whole of their lives and the lives of their friends and workmates.